MY LITTLE PONY: Live-Action Trailer (What did you think?)

Secret Sauce sent us this personally on Twitter so I feel obligated to post it even though it’s kinda weak. There are a few cute parts and it definitely had some potential but I was really hoping to laugh out loud and the most I did was smile once. I actually rolled my eyes a few times which is never a good sign. My literal first thought after seeing this was “weak sauce” so perhaps putting sauce in their name was a poor idea on their part.

Rise of the Buttercup Sprinkles? I mean, if you are going to take the time to make a whole video, you can’t just take the time to Google an actual MLP name? Jamie Oliver did! And it was too long. It would have been a cute gag at half the length but after seeing the same Photoshopped colored horse gag several times I felt like we were beating a dead horse. Or pony.

I think it probably meant to be funny to people who have never really heard of My Little Pony before as it is mostly a bunch of spray painted horses which impeded my enjoyment of the video. As a long time horsewoman, this actually totally upset me for some reason because all I could think of was that I hoped they used something that would be safe for the poor horses and whether it would give them a rash. I imagine this hang-up is mine and mine alone because of my years doing horse health care and I am willing to acknowledge that.

But, hey, it is hard to make a video and comedy is never easy and very subjective, I definitely understand that. They obviously put a lot of work into it and it was a good effort and shows some potential for future videos. I am giving them the benefit of the doubt and posting it either way because I think it was a bold idea for them to try even if it wasn’t as good as I wanted it to be.

Better yet, what would you have put into a Live Action MLP movie trailer? Someone want to make one?

As for me, I still prefer Robot Chicken’s Apocalypse Pony. 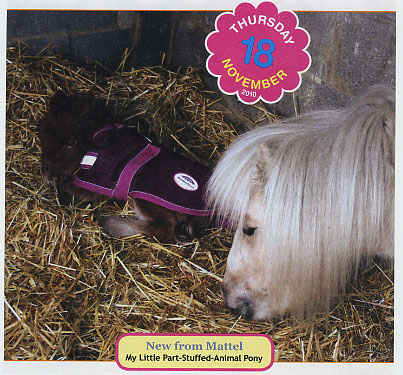