How can factory made Sparkle, Glow ‘n Show or Divine Shine ponies be considered one of a kind? 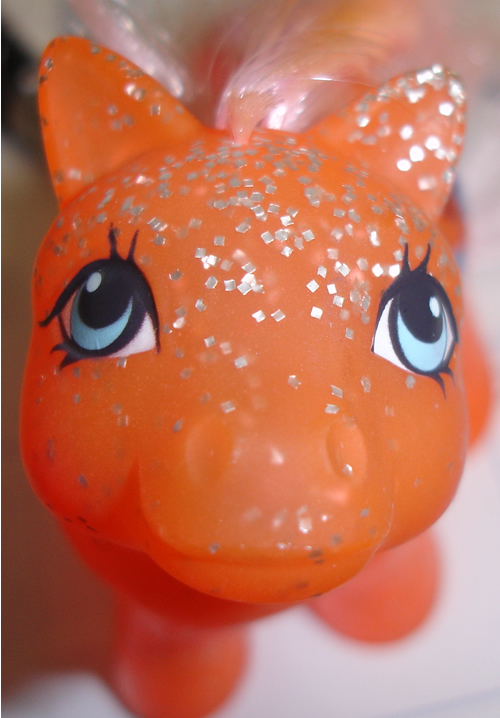 How can Sparkle, Glow ‘n Show or Divine Shine ponies be considered one of a kind? Aren’t they made in a factory like all other ponies?

This is one of those things that causes some confusion amongst pony fans. Sparkle Ponies, Baby Sparkle Ponies, Glow ‘n Show Ponies and Divine Shine Ponies are sometimes referred to as being one of a kind (that’s OOAK for the cool kids). While obviously these were factory made like all My Little Pony items, what collectors really mean by this is that no two are exactly alike.

See, all four of the types of ponies listed above are filled with something (glow in the dark chips in the case of Glow ‘n Show, sparkles in the other three cases). Literally, this means the ponies were lined with a sticky substance and the “filling” was tossed inside.

But gravity added the element of surprise and randomness and no two ponies could possible be filled in the exact same pattern as it all depended on how the filling fell. Meaning, the one you have in your hands, while technically the same as the one I have in mine, will have a totally unique pattern of sparkles (or glow in the dark chips).

To illustrate this further, you sometimes find ponies like this: This is Baby North Star of the Baby Sparkle Ponies. She’s cute and she knows it. But what isn’t immediately clear from this picture is that her sparkles are really uneven. See? There are hardly any sparkles on her from this angle. But when we go back to the top of her head… There is a massive clump of sparkles in her one ear and a disproportionate number of sparkles on her face in general. (Her forelock is also trimmed but that’s besides the point.)

Does this make her more or less collectible? Well, that depends on how unusual the spread is. A pony like this still looks mostly like herself. However, if, say, she had almost no sparkles on her body and they were all clumped into one foot, I could see that decreasing her value. Even though that’s how the factory made her, just the fact that a pony looks off can decrease its value.

However, that said, there are always those collectors that specialize in the unusual and a one of a kind pony like that may be just what they are after! There is, very literally, no other pony just like this.

Have you ever gotten a particularly unusual spread of sparkles or glow chips in a pony? We’d love to see the photo!

How do you feel about uneven fillings? Would it be enough to make you not want the pony?

John Locke from LOST custom Vinylmation (via Spotlight On:…

a Retro Review of Teenage Mutant Ninja Turtles II: The Secret of the Ooze

Would You Buy A Michaele Salahi Action Figure?