Could new My Little Pony toys that look more like the Friendship is Magic characters be a bad thing?

Time and again, the thing everyone seems to clamor for from Hasbro are pony and playsets that more closely match the look of the ponies on The Hub‘s Friendship is Magic show. This request is also closely followed by requests for characters from the show that have never been made into toys (such as the controversial Derpy and DJ Pony, among others). As Summer recently covered, many of these fan favorites are finally coming to stores soon but, as I was drooling over this custom Luna on eBay today I started wondering… might toys that look more like the FiM characters be a bad thing in the big picture?

Here me out. I’ve been a pony fan for a long time. I have never seen this absolute creative frenzy of custom figures and plush like we’re seeing now. It’s like the fact that the toys look so different from the television show kicked the art form of pony customization onto a whole new level and everyone has kicked it up a notch. The market for customs has exploded because fans want things that look like what they see on their TV (or YouTube) and they just aren’t finding that in stores. The really exciting part about this is that… while it may have started with FiM, it’s effected the custom world as a whole and given us some amazing creations that have nothing whatsoever to do with the new show. It’s like we’re in an MLP renaissance for artists whose chosen medium is pony and I would just hate to lose that.

Obviously, Hasbro can never make enough toys from the FiM show or make the characters look enough like they do on the show to kill the custom market completely (especially since it’s thrived for years before it occurred to anyone that friendship might indeed be magic) but I do wonder what effect these new toys will have on this burgeoning custom boom.

What do you think? 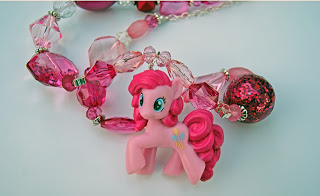