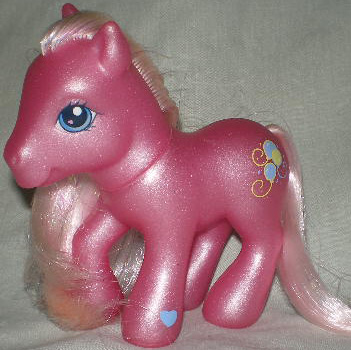 I’ve been wanting to do a series like this for a long time so a big thanks to trviamaven for teeing me up with last week’s trivia question. Now if only we can sneak them all in as trivia columns, I might actually get to do the whole series. 😉

Pinkie Pie debuted first debuted in 2003 as part of the Glitter Celebration Set. She was actually in both the first and second set of Glitter Celebration ponies in two different poses, an early example of the overexposure that would eventually make her infamous with collectors.

See, Hasbro has long insisted that pink ponies sell better than ponies of any other color and Pinkie Pie soon became one of the most hated characters ever as the market was flooded with version after version of this same pony in a variety of poses and styles. Even many of the collector exclusive ponies during the early years of G3 were just special versions of Pinkie Pie. The situation only got worse when she was named one of the Core 7.

For collectors who were used to a wide variety of ponies, colors and symbols, the glut of Pinkie Pies lead to collectors getting sick of her, begging Hasbro to turn their attention to new ponies or, at least, different ponies. But while collectors may have had mixed feelings, Hasbro embraced her fully making her the unofficial face of the new wave of ponies that began in 2003 and continues into today. Pinkie Pie was also the very first pony made into a walkaround character.

In 2010, Pinkie Pie joined the cast of My Little Pony: Friendship is Magic. Though there was talk of changing her into a pegasus (as they did with fellow 2003 release, Rainbow Dash) they ultimately left her as an earth pony. As the show brought her to a whole new audience of children and bronies, Pinkie Pie has enjoyed new found popularity with her new bubbly personality.

Has the new show finally redeemed this MLP black horse? Only time will tell.

But with Friendship is Magic borrowing so heavily from the first generation of MLP, I had to take a look back to see if maybe there was a proto-Pinkie Pie hidden somewhere in a past generation. Let’s see… pink hair, pink body and balloons… Might her distant ancestor be Twice as Fancy Up, Up and Away released between 1986-87? Her balloons are green and yellow instead of blue and yellow but the similarities are there.

How do you feel about Pinkie Pie? Do you still harbor some ill will or has she wormed her way into your heart?

Paint Your Own President Barack Obama figures. Can we file this…

Now, all we need is Harry Potter himself…