Second generation (G2) pegasus ponies, the only flying My Little Pony with removable (and wearable) wings 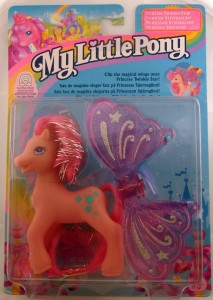 Once you had a pair of G2 wings, this let you make any G2 pony into a pegasus… just like that! Pretty nifty, huh?

One thing I find strange, though, is that… of all the pony conventions and meet-ups I’ve been to over the years, I can’t ever remember seeing someone wearing a pair of G2 wings in their hair. See how cute it would look? Why isn’t this fashion trend sweeping the collecting community? Have you ever rocked this look? Pictures are absolutely welcome!

PS: I know that G1 Flutter Ponies wings come out but since they aren’t supposed to be removed, they don’t count as being removable. 😉

Worst pony I’ve ever seen! I mean, come on, it doesn’t even have brushable hair!…