Chuck E. Cheese: Where a kid can be a… My Little Pony? 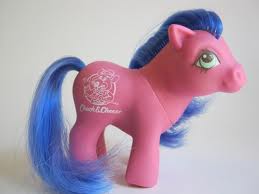 She’s a pretty collectible G1 pony because of her rarity but I think she’s unusual for another reason. She’s the one and only MLP to ever have a corporate logo on her rump!

Doesn’t everyone like a little pony with their pizza?