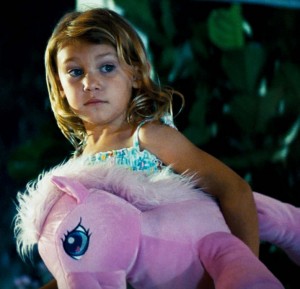 There hasn’t been a My Little Pony feature film since 1986’s creatively titled My Little Pony: The Movie, but one popular pink pony managed to sneak her way into the multiplexes since then in a brief cameo in 2007’s Transformers.

In the Micheal Bay blockbuster, a little girl carrying a Pinkie Pie plushie mistakes the Transformer Ironhide for the tooth fairy. As both Transformers and My Little Pony are Hasbro properties, the cameo was not only cute but also probably made someone in corporate use the phrase “brand synergy.”

Personally, I remember seeing the Transformers trailer for the first time in theatres and cackling like a crazy person when Pinkie Pie showed up on screen because it was just too perfect. What did you think of the pink wonder’s feature film debut? And, more importantly, do you think we’ll ever get another My Little Pony feature film?

What does OOAK mean?

Have you ever convinced someone to join the herd?