I made it to the other side! 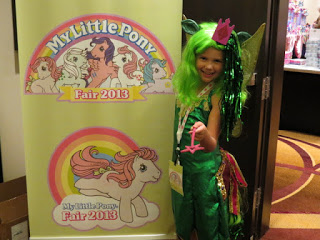 I’m back (I think) from my 3 month hiatus. I got majorly wrapped up with MY LITTLE PONY Fair 2013 planning this year and it sucked about every ounce of Pony out of me. It was all worth it in the end as the event was a terrific success and everyone had an awesome time. Not to mention, we had record attendance (including tons of little ones!) I got to spend some time getting to know, MY LITTLE PONY creator, Bonnie Zacherle. She is a lovely person and has some terrific stories to share and great taste in wine! Now that I have had a couple of weeks to recover, I’m ready to talk, chat, and blog about all things MLP once again.

I’m aware that this weekend marks the 3rd annual BronyCon (held in Baltimore) and while I considered attending, I decided that the Cincinnati Pony Collector Event (held on the same weekend) was more my speed this year. I’m excited to hang with fellow collectors and actually chill out and enjoy myself. It’s been awhile. 🙂

I’ll be sure to snap some photos while I’m there to (hopefully) add to my Pony scrapbook. It is in serious need of an update. Someday I’ll get it up to date again. The past few months have been a whirlwind and I welcome the break to actually get back into actually collecting Ponies rather than just promoting them. In addition to adding some exciting new collection pieces, I’ve been slowly working on putting my Pony Room back in order with the addition of new Billy bookcases from IKEA.

Until next time, I’ll leave you with this adorable photo from the MLP Fair of a little girl dressed as Princess Pristina because she is just too adorable! New WeLoveFine My Little Pony T-shirt contest is for Friendship is Magic Bronies only?

The MY LITTLE PONY Mystery Minis Have Arrived!