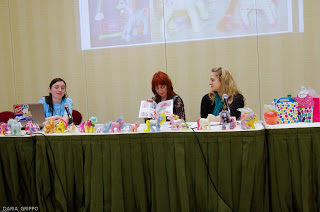 Remember back in March when I was lamenting my missing camera chargers and my non working memory card reader and I promised photos of Big Apple Pony Con? Well, here a few photos of the event and some of the awesome peeps I got to hang with over the weekend:

On Saturday, I was a speaker on the MLP Collector Panel with Valerie and Karen who are both really great girls. I’d spoken to Valerie many times, but this was the first time we actually had the opportunity to meet. Karen was the organizer for Big Apple Ponycon and a longtime friend. Since I was a Guest of Honor at the event, my husband and I were invited to attend a VIP party that Karen had organized at a posh boutique hotel in Brooklyn. Karen is on the left, I’m in the middle and my husband is on the right.:) We were treated to appetizers and an open bar and I was able chat with Andrea Libman, who voices both Fluttershy and Pinkie Pie in the My Little Pony Friendship is Magic series (who is super cute by the way!)  I also got to have a great conversation with Andy Price who is one of the MLP Comic artists for DWI, and Jayson Thiessen, director of MLP: FIM. Of course, by the time I got around to talking with Jason I was a couple of drinks in and so I don’t really recall what the conversation was about, but it involved lots of laughing and was a good time.

In this photo, I’m clearly having a good time in the background! I was also recruited to be a Costume Contest judge during BAP(which was so fun) and I got to witness this: My husband and I had a great time, plus we were able to sneak in a few Broadway shows during the trip. Hopefully, I’ll be invited back next year!

If you’ll excuse me, I’ll just be in the bathtub doing some light reading… htt…