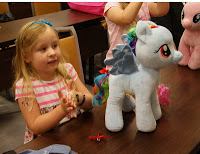 Back in April, when Build-A-Bear Workshop launched their Make-Your-Own Pony Collection with Pinkie Pie and Rainbow Dash and special outfits I was beyond excited. I loved the look of the ponies and their brushable hair. After all, as a MLP collector, you tend to get excited if their hair can be brushed.

As I was drooling over the promo pictures released online and planning my trip to Build-A-Bear, I had the brilliant idea of inviting Build-A-Bear Workshop to host a Make-Your-Own Pony Party at the 2013 MY LITTLE PONY Fair. Even though the MLP products are to be sold exclusively in Build-A-Bear Workshop stores, Hasbro gave them the all clear to participate in the Fair. So, while I wanted to go make my Pinkie Pie and Rainbow Dash right away, I patiently waited until the MY LITTLE PONY Fair and I’m so glad I did.

The MY LITTLE PONY Fair Make-Your-Own Pony Party hosted by Build-A-Bear was a huge success and so much fun. I was able to snap some photos of some of the Fair goers as they participated in the Heart Ceremony. This past Friday, I took my little guy to Build-A-Bear. He had never been and has recently been begging to go to make a kitty cat after seeing the Build-A-Bear commercial. Of course I was on board since the new Twilight Sparkle and Spike had been released. Plus, I had lots of “Bear Bucks” I had earned from scheduling the Fair BAB party. I invited my Cousin and her little girl to go with us and it was an all around great day. Both little ones made their own animal and I can home with Twilight Sparkle (with her outfit) and Spike.

I really like the large size of the Build-A-Bear Ponies. I had them add extra stuffing since my will be displayed on a shelf in the Pony Room. I noticed that while the Build-A-Bear did have the Rainbow Dash Plush Ponies available (in addition to Twilight Sparkle) it seems that Pinkie Pie has been discontinued.

Here are a couple of photos of my newest collection additions as well as a photo of L and his “New Kitty” just because. Enjoy! Big feature on My Little Pony, Friendship is Magic and Bronies in Wired

You’ve only got until Friday to get your tickets and complimentary swag! #mylitt…