Applejack is One Popular Pony (and Photo) 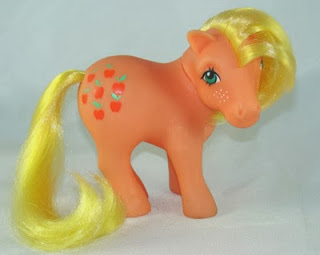 I’m (obviously) a HUGE fan of all things My Little Pony and articles, photos, and other random Pony related news appear on my new feed daily. When an artist’s project from Purple Clover showed up on my feed this evening, I was delighted to see the that My Little Pony was included. The project is entitled: Toy Story: The Later Years and shows depictions of how the artist imagines classic toys would appear if they aged, along with a short description of their current state. The creator of the project included not just any pony, but one of my favorites, Applejack. While viewing the artist’s My Little Pony creation, I noticed that there was something familiar about the edited image. The base picture with which the Pony entry was created, was done using my photograph of Applejack that appears in both The My Little Pony G1 Collector’s Inventory book as well as in an online article on About.com on my collection that includes photographs of some of my collection items.

Here is my original photograph: Here is the altered artist’s photo using my photo as a base: I’ll admit that I find the artist’s project to be a fun interpretation and an entertaining read, but I was surprised that no credit was given to the original photo image. I assume that since the Pony photo was used without credit that there is a possibility that the other images are also used without permission or credit given.  I’m flattered that someone liked my photo enough to copy it and use it, but at the same time I’m a little surprised that it wasn’t credited or linked back or something…

What would your response be if you were in my shoes? Would you contact the artist or website?

Just listed on 12/01/08! Better grab these items before someone else does!

Can you spot the My Little Pony cameos in Mad TV’s Thunder LOLcats video?

Spring Sale: Last 24 hours to save!