The MY LITTLE PONY Mystery Minis Have Arrived! I placed an order through VNC Toys for the new MY LITTLE PONY Mystery Minis produced and licensed by Funko. I ordered a full case of 12, because each case has all 12 individually boxed ponies. I wanted to be sure to get the whole set. As you can see, Funko is pretty serious about keeping the Pony inside a mystery! The outside of each box is wrapped in plastic. The small boxes are also sealed shut and to top it off, the pony inside is concealed in a black plastic bag. It is kind of like the MLP version of Fort Knox. Also, unlike the blind bag ponies, there are no codes on the boxes to determine which pony is inside before opening. There are 12 different ponies in the set and they are pictured on the side of the small box. No names are included, but as all of these ponies have been released previously in some form or other christmas inflatables, their names are not a mystery (at least not to collectors.) Personally, I love the size of the Mystery Minis (they stand a little over 2 and a half inches tall.) When I fist saw the box art for this set, I wasn’t wild about the Ponies’ bodies being black. However, now that I have them in my hands, I am a fan. They remind me of little chalkboards.

In addition to the ten “chalkboard” ponies, there are two special “Glow in the Dark” ponies thrown into the mix. The most exciting feature of the ponies in this set… They have cutie marks on BOTH sides of their bodies! I really hope that the MY LITTLE PONY Mystery Mini Ponies are a huge hit for Funko. I’d LOVE to see another set released (including Twilight Sparkle, Rarity, and Applejack) as well as some Mystery Minis with the ponies’ regular body colors.

Hope you all are enjoying the holiday season!

Your favorite My Little Pony

Big feature on My Little Pony, Friendship is Magic and Bronies in Wired 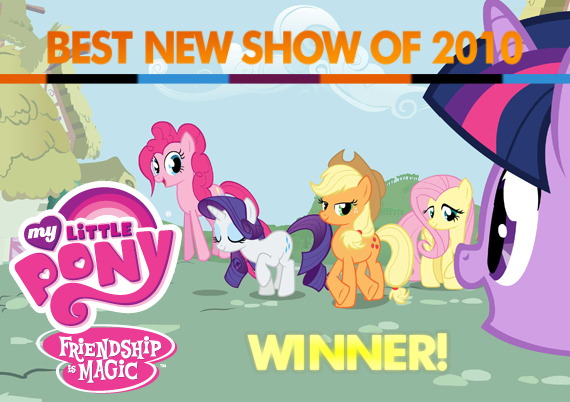 My Little Pony: Friendship is Magic is the best new show! Also, how to see it on the big screen…

Just listed on 11/13/08! Better grab these items before someone else does!