Do You Know Why G1 Ponies Have Tail Washers? I Do!! 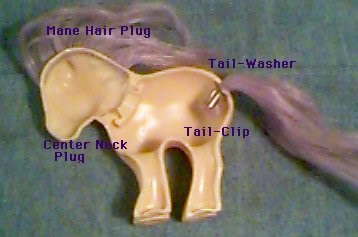 One of the perks of running the Fair is the ability to be able to have lots of Pony conversations with the Guests of Honor. It is crazy the little tidbits about Pony that both Bonnie Zacherle and Liz Knight have shared during our conversations. One such fact was why the G1s have tail washers. According to Liz (and Bonnie confirmed this), when they first made the original 6 Ponies(Cotton Candy, Minty, etc.) they noticed that they kept falling over on their faces because their heads were too heavy and the Ponies weren’t balanced. To solve this issue, someone in the office suggested putting a weight on the inside of the pony near the Pony’s back legs so it would stand upright without falling on its nose. The end solution was the tail washer, which was also incorporated into how the hair was installed to make it appear fuller (so the tail washer ended up pulling double duty of the first six ponies!)
I thought this was a pretty neat little Pony fact. 🙂
* I found this photo that illustrated perfectly what a tail washer is and its location in a pony on Sail-Away’s Harbor. There was also a step by step tutorial for removing a pony’s head and tail, but thankfully not how to dissect a Pony into halves. 🙂

“”They asked me things like, ‘In episode four of season two, when you did this,…

What does custom bait mean? | My Little Pony Collecting.com http://buff.ly/1cGEr…